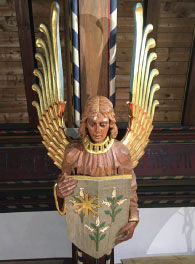 Several hand-carved angels have been watching over worshippers since 1921, when the building was completed. 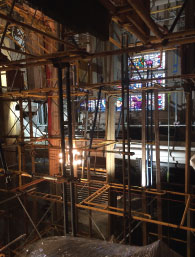 Scaffolding set up for a floor-to-ceiling cleaning of Skinner Chapel.

The records of the United Congregational Church of Holyoke document over 200 years of the ecclesiatical history of an industrial city. In addition to records of membership, baptisms, marriages, and church governance, the collection includes valuable records of the women’s missionary society, the German Maenner Bund, and a long run of church newsletters that offer insight into the weekly course of events in the religious community.